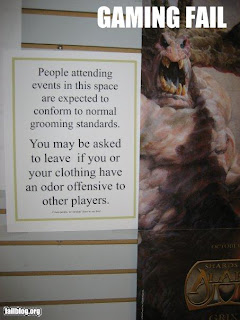 Most of the websites and blogs of the alternative right often categorize people, especially men, into classifications such as alpha, beta, gamma, and omega, which are obviously inspired by the structure of a wolf pack. Many of these people categorize nerds as omega males, a classification that I find entirely wrong.

If you ask most of these nerd-haters what a nerd is, they probably couldn't give a good answer. I've attempted to come up with one: my definition of a nerd is an intelligent person with an IQ over 120 and an interest in computers and interests in fantasy, sci-fi, gaming, science, and/or math, as well as related areas. Now, it's possible to be a nerd and not have all of those interests (such as a gamer who spends 8 hours a day playing World of Warcraft but couldn't care less about dy/dx), but having a high IQ and an interest in computers are absolute requirements. The interest in computing can range from programming and graphic design to building 133t boxes to merely using computers frequently to play WoW and MW2. A smart person who hates computers is just a smart person (maybe a medical or law student) and stupid people who love computers are known as "Twitter users."

When PUAs and HBDers call nerds omegas, they are being too broad in their labeling and, in my opinion, they are misusing the word omega. An omega is the lowest member of the pack. However, most nerds are not members of "the pack." Many of them do not interact well with stupider people - "the pack." They either have their own nerd pack or would be more accurately characterized as lone wolves. Nerds know they don't fit in and instead of trying to, like an omega wolf following the others, they go their own separate way.

True, there are plenty of nerds out there who lack social skills, proper hygiene (see the picture above), and emit an aura that repulses women as well as other nerds. These people are both omegas and nerds, I agree. But they are also losers (I use the term "geek" to describe this group of people). There are losers among many social groups, not just nerds. As an aside, I've noticed from my considerable anecdotal experience dealing with nerds that most of these stereotypical loser nerds tend to be more interested in the gaming aspect of nerdom rather than intellectual pursuits. Take note that I'm not saying hard-core gamers are losers - that is an accusation thrown around by single middle-aged women who are upset because men would rather play X-Box than marry them - just that most of the stereotypical nerds seem to be hard-core gamers.

Omega males also either find it nearly impossible to get girlfriends/female companions or have a girlfriend rating low on the 1-10 scale. The fact is, most nerds are capable of finding girlfriends. Go to any nerd convention (i.e. Comic-Con), computer science class, LAN party, Dungeons and Dragons session, or game shop and get to know people there and you will find that they have girlfriends, wives (!), and other forms of female companionship. Some of them will have nerd girlfriends, but due to the fact that male nerds greatly outnumber female nerds (in part because of the differences in male and female IQ standard deviations) many of them have normal girlfriends who really are not that bad looking.

There's also the fact that most nerds, due to their superior IQ, end up successful in life. Nerds not only end up in high positions in tech companies, but in lower-paying, but prestigious, positions as university professors and similar jobs. Even nerds who have a very hard time with social interaction can find jobs where they use their intelligence to make a decent income. I've had a few STEM professors - decent ones at that - who were like that. Omegas, by definition, are unsuccessful.

I have a theory about why PUAS and HBDers seem to have a disliking of nerds, although that should probably wait for another time. My point is, nerds are not omegas by default. Sure, some are loser omegas, but most are just really smart people who are interested in things people with lower IQs are not. And the chances are, many of you reading this work for a nerd, but it is safe to say that none or very few work for an omega.
Posted by TAS at 11:06 PM